The Enchanted Drive: Landscape in Motion

The research method of the Enchanted Drive project is practice-led. The research findings of this project are not only held within the artwork but are co-joined with the methodology: the self-participatory nature of obtaining information; the production of the artwork supported by the related theories that bring cognitive clarity to the experience. Suze Adams points out that it is not just about the practice; there is value in the integration of the different parts of the research to “inform and transform” practice and theoretical understanding (2014, 218). Brad Haseman and Daniel Mafe’s view of the amalgam of different documentations into practice-led research is that it is difficult to prescribe a uniform set of criteria to measure a practice-led project’s success (2009, 220). However, Estelle Barrett and Barbara Bolt’s 2014 explanation of creative arts practice as research rests on the “shifts in awareness” of the viewing public, irrespective of how the research has been undertaken. Barrett and Bolt’s broader criterion is fair and appears it can be applied to any creative project (2013, 218).

Acknowledgement of Traditional Owners of the Daki Country

While this project did not require ethical clearance I wish to acknowledge that this project does have a cultural attribution. I conducted my research by driving through country of the Gabi Gabi people, the traditional Aboriginal owners. I wish to acknowledge and extend respect to the traditional owners of this country, and specifically the country of the Daki (Stones Standing Up) and its hinterland escarpment.

The Escarpment Drive as a driver-car

Over time I learned much about how vision and perception operate helped by Gibson and other vision researchers, and it had a powerful impact on my thinking about the drive as art. The drive experience therefore inspired another research journey of self-discovery with a painting practice that has in turn been re-shaped by the drive experience.

Inserting myself within the car established the parameters of my project, which distanced me from a direct experience of the landscape as a subject, to focus on the rapidly moving perceptual experience. The process of working through the experience was like peeling a transparent onionskin, for, as I understood one layer I could see more layers being revealed. Initially I was aware that I was observing myself observing, and that the car enabled me. For my eyes, the drive showed the surrounding landscape as a continuously passing parade or changing scene, so a number of works were produced to reflect a passing parade of states side by side in a spiral. Although the spiral composition offered a beginning to this process, it tended to isolate one scene from another and this did not match the experience. As I sought a new way to portray the experience I found new directions. Tim Dant’s driver-car notion, in which the car with the driver ‘affords’ us a particular experience and capabilities due to propulsion, and effortless movement, was a conduit to new ideas (2004). Also, Merleau Ponty’s idea of embodiment with the environment mediated and assisted by an aid to gain knowledge little by little, upon repeated engagement (2002, 286). Ideas such as these enabled me to supersede a side-by-side approach to a composition with overlapping and interpenetrating layers as one image.

Lappin’s (2013) and Tse’s et al. (2013) findings that perception is a construction of the individual, together with Gibson’s (2015) ‘ecological approach to visual perception’ provided the break-through evidence to support what I was experiencing in the drive. With the support of these vision perception approaches, I was happy to visually contextualise the perceptual experience into the layers of my painting that could convey the way in which ‘the past lingers across the present, in which the future also inhabits by engaging memory, imagining, expectation and knowledge’ (Gibson 2015). The practice therefore transitioned from transformations to transitions to one indivisible multiplicity. The documentation of the evolution of this generative practice is illustrated by the following images. In figures 1 and 2, The Long Way Home, shows a series of individual transformations in a spiral composition, blurring into one another giving the effect of a mesmerising passing parade through the flicker of strobe sunlight. 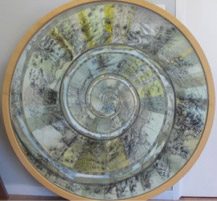 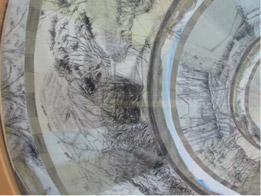 Figure 2: DETAIL: The long way home
Figure 3, The Drive 18, is an example of a number of experimental sketches where a “transition” expression was attempted. 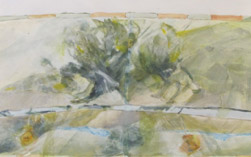 In figure 4, The Drive 15 is from the series of attempts at showing how vision is fractured, and of what was just seen lingers over what is currently seen. 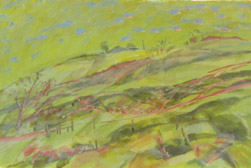 Figure 5, The Enchanted Drive No. 6, shows one of my exhibition paintings where transparent layers of flowing paint interpenetrate to give effect to “one indivisible multiplicity”, merging the thought processes of the previous experiments together. 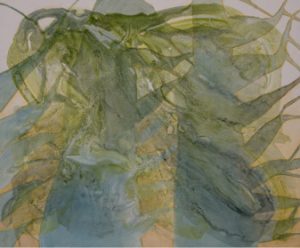 I developed word-pictures to gain a deeper understanding of what typified the escarpment drive. I used conventional painting techniques to capture the perceptual encounter and the titles give access to that encounter. For example, in figure 6, tinted and shaded glazes are used to give the effect of ‘flicker and strobe’ of light during a drive. In figure 7, line is drawn in loops on itself to suggest the ‘switchbacks and dippers’ of the road following the hairpin contours, and the ups and downs of the rises and falls in the escarpment. In figure 8, a tranche of colours in thin stripes gives the appearance of dancing trees. In figure 9, a superimposed line suggests a perceptual afterimage and gives the illusion that the golden hills had quickly moved through time. In figure 10, the edge-to-edge frontal plane conveys the obscuring of horizon and makes the landscape appear as if one is quickly driving ‘through the wall’ of the escarpment range. In figure 11, layers of alternate light and dark lines provide the impression of a life force in the landscape plenum. 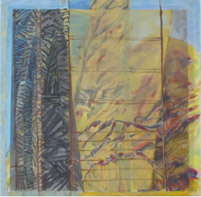 Figure 6: Flicker and Strobe, 2015
Oil on canvas
680 x 680 mm
Tinted and shaded glazes are used give the effect of obscuring vision. 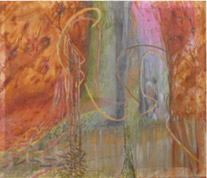 Figure 7: Switchbacks and Dippers, 2015
Oil on canvas
H 720 x W 840 mm
Line is used to suggest movement through the escarpment. 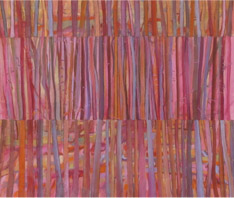 Figure 10: Through the wall, 2015,
Oil on canvas,
H 700 x W 380 mm
Edge to edge frontal plane obscures perspective and appears as an impenetrable wall of the escarpment.

These preliminary word-pictures identified some of the core elements of the drive and paved the way for the work that followed. As I gained a better understanding of the drive as past, present and future layers interpenetrating one another a new approach to painting was required. What follows is a sample of the work that was produced as a direct result of this preliminary work where the word-pictures are brought together into one image to give a more comprehensive and holistic expression to the drive. The use of new and traditional painting media in new ways was an essential factor in the allowing visual elements to fuse together in the painting.

The time between the physical making and reflection helped define the nature of the work and set up a platform for the next development. In this on-going process, my painting skills and knowledge were challenged. In capturing the driver-car experience my aesthetic preferences and skills became more resolved and refined and played a critical role in developing a lexicon that reflected a truth to experience.